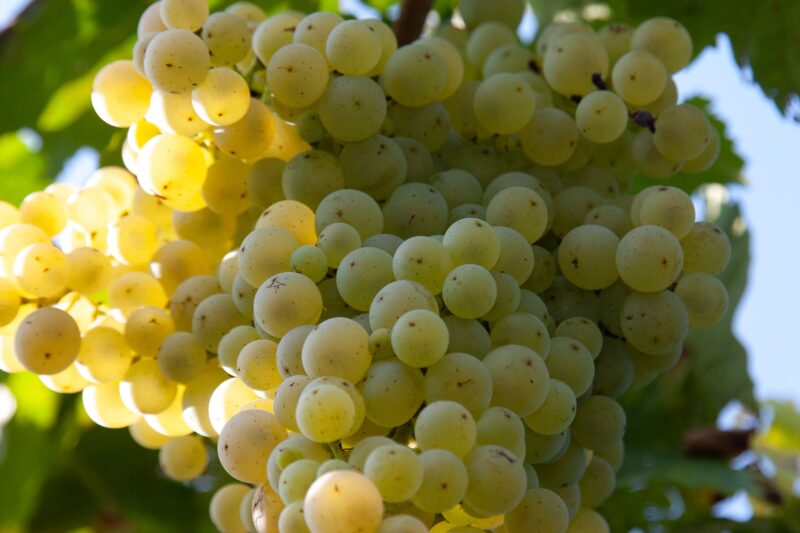 The varieties of our organic grapes

Conegliano Valdobbiadene Prosecco Superiore DOCG, made from Glera grapes, is a rustic and vigorous white grape variety with hazel vine-shoots, large and long bunches featured by golden yellow berries. The Charmat method (sparkling winemaking method) enables to get the "Brut, Extra Dry and Dry" versions from this vine-variety, which stands out for its straw-yellow colour, its mild thickness and its fruity and flowery scent. Conegliano Valdobbiadene Prosecco DOCG wine is produced exclusively in the area of Treviso, in a limited spot between the villages of Valdobbiadene and Conegliano.

Merlot is a black grape variety, whose name comes from the particular preference that blackbird (or "Merlo" in Italian) has for its berries. Its colour is ruby red or garnet, if it is aged. Its typical and pleasant scent reminds of blueberries or raspberries, however it is less heterogeneous and pleasant once it is aged. Its flavour is mildly dry or semi-dry, tangy, full and tannic.

Cabernet wine is produced with grapes of the varieties Cabernet Franc, Cabernet Sauvignon or Carmenere, that can be used separately or jointly. It is featured by a ruby red colour, which becomes almost orange, brick red or garnet once it is aged. It is characterized also by a deep vinous, grassy and pleasant scent, as well as by a dry, round, rightly sour and tannic flavour.

This wine is produced from the homonymous grapes and it can be enriched with other grape varieties. It has a good structure and elegance, its colour is deep straw-yellow with coppery nuances given by the fermentation with its skins. Its scent is flowery and fruity with deep apple and elder hints. Its fresh and velvety pineapple and orange peel nuances are well perceived on the palate.

Sangiovese is a black grape variety very widespread in Italy, it grows mainly in regions such as Emilia-Romagna, Campania and Tuscany. Sangiovese is classified in different varieties according to the size of the bunch and the grapes. Among this classification, the two most important are Sangiovese Grosso and Sangiovese Piccolo. The wine is ruby red and intense. On the palate it is warm, fruity and tannic.

A pale straw-yellow with greenish reflections characterizes the Verdiso wine. Its mild, spicy and slightly fruity scent is featured by a typical forest hint. Its flavour is dry, vivid and mild sour, like a green apple. The aftertaste is medium-bodied and bitterish. Nowadays Verdiso wine is available in still, fizzy, sparkling and semi-dried version.

Primitivo is a black grape variety widespread in Southern Italy, particularly in Puglia, in the area of Manduria. The origin of Primitivo is uncertain, but it is probably from Dalmatian and it is arrived to Puglia (Italy) more than 2000 years ago thanks to the Illyrians. The meaning of its name derives certainly from the ripening precocity of its grapes. Its dark blue berries are extremely close to each other and the bunch is very compact. The Primitivo has an intense, deep ruby red colour with violet reflections. The scent is of red fruits, black cherry, blackberry, plum but also floral notes of violet.

This vine-variety owes its name to Mr Luigi Manzoni, who had the idea to crossbreed two grapes, such as Riesling and Pinot blanc. This sparkling wine is featured by a straw yellow colour, as well as fruity and flowery scents. Its taste is aromatic and elegant with a pleasant hint of white peach and almond.

The Bronner vine-variety was created in the 70s by Norbert Becker, a biologist of the viticulture institute of Freiburg (Germany). Two years later, this grape was officially recognized as protected variety and it is currently cultivated in small quantities in Germany, Switzerland and Italy.
In Italy Bronner was registered as cultivable variety in 2009.
This is a fungus-resistant grape variety that allows to reduce chemical treatments. The wine has a pale straw yellow colour with greenish reflections and excellent organoleptic characteristics.