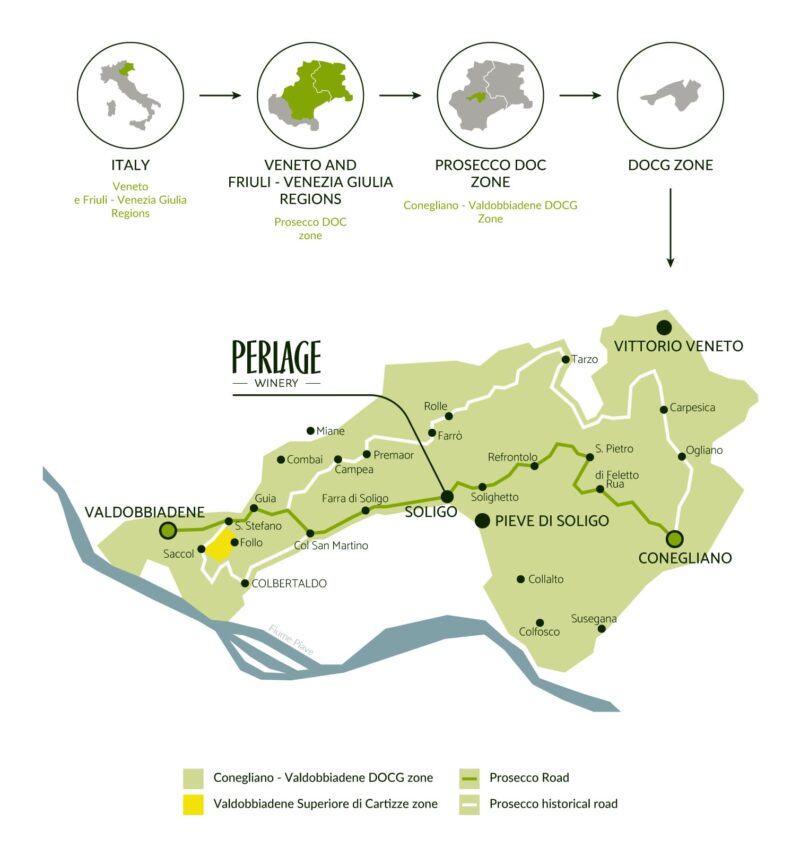 The Valdobbiadene Prosecco Superiore DOCG territory extends through the band of hills of the Province of Treviso in the Veneto Region in northern Italy and encompasses the area between the towns of Conegliano and Valdobbiadene.

The steep slopes of the hills make it difficult to mechanize the work and it is truly thanks to the large peaceful army of the men and the love they have for their land that it has been possible to preserve these beautiful hills and to create a strong bond between man and rural countryside.

Travelling from Valdobbiadene to Conegliano, on 'the DOCG Prosecco Superiore road', (which in 1966 became the first road in Italy dedicated to a wine), it is possible to see several natural and artistic treasures dating back to different periods: from the aristocratic Villa dei Cedri in Valdobbiadene to the elegant Villa Brandolini in Solighetto; from the village of Rolle, protected by the Italian Foundation for the Environment, to the Palù in the Quartier del Piave; from the famous cypresses of the church of San Vigilio to the Abbey of Follina, that is jewel of the late Romanesque architecture.

Due to the beauty, peculiarity and uniqueness of the landscape, the Prosecco Hills of Conegliano and Valdobbiadene were recognized as a UNESCO World Heritage Site in July 2019.

A winery that for three generations has cared for and loved the fruits of the Conegliano Valdobbiadene territory and its Prosecco Superiore DOCG.